Crossing the finish line never gets old. No matter how many times you say you hate this or I'm never doing this again, it feels amazing to finish. It's really hard to describe. And as much as I said never again. I'm doing it again. Completely hooked. Overall I am really happy how the day went. I had over an hour PR so I can't complain and placed 11th in my AG. But.... yeah.... I messed up on the run and I know I can go faster. Looks like IM number 4 is in my future. Also thank you to Jason for always been there for me and supporting me. I know I am super needy and high maintenance. Love you so much!
Posted by Sarah at 11:52 AM 1 comment:

Hey there folks. Long time no see.
I just got back from a wonderful 4 day weekend of racing and visiting my family :) I flew into the Columbus airport on Thursday and Joe (my brother in law) picked me up. I was able to spend a nice relaxing evening visiting with my sista, Rachael, and my nieces. On Friday morning after dropping off the kids we made our way over to Muncie which was suppose to be a little less than a 3 hr drive. 5 minutes into our drive though we hit traffic and basically didn't move for an hour. I guess that's just my luck for bragging out how smoothly travel went the day before. It wasn't too big of a deal though because we had all day to get there.
Once in Muncie we made our way to packet- pick up. The site itself was in the middle of no where and we had a hard time finding it.  Once we finally did find it, pick up and racking the bike went smoothly. Little black bag number 3 acquired, 2 more to go! We were also able to do an open water swim practice. It was really nice to cool off and get some good ows practice in since I really never have a chance to. The water felt great and I was almost jealous I wasn't swimming the next day.
Race Morning
We woke up at 4 am. We stayed at a Best Western and the hotel was nice enough to provide breakfast to the athletes starting at 4:30am. I really wasn't hungry that early in the morning so I only had a mini muffin and filled up my water.

We were out the door by 5am and on our way over to the race site. Of course we got lost again ....if that is even possible....just follow the rest of the cars with racks on them, right? Wrong. There was a ton of ways to the lake, but we made it there by 5:30. We had pre-paid parking the day before at a lady's house across from transition. True IM provided free parking, but this was super convenient and it was nice not to worry about parking.
My sister set up her bike and the race official went over the rules with us and some of the other relay teams. There was a relay pen for both the bikers and the runners. You had to stay in the pen until you say your relay team mate. At that point you could come out and exchange the chip. 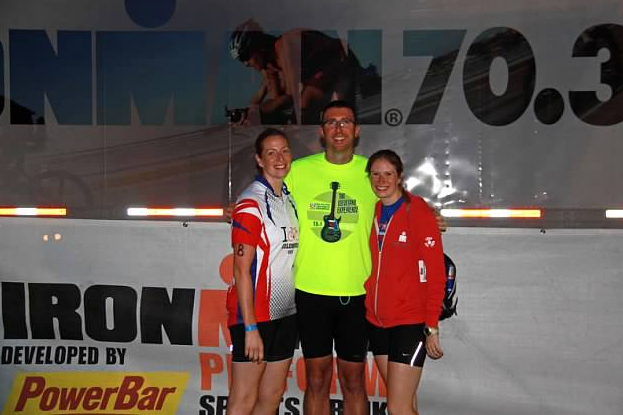 Anyhow, we headed down to the water about 6:40ish and relaxed while we ate some snacks and watched the pros and other waves go off as we were in the last wave starting at 8am.
The Race
Now for myself I wasn't too nervous about the day as I was using the run leg as a training run, but Joe and Rachael have never swam or biked this distance before in a race! When we originally registered for the race almost a year ago I was excited to get my family involved in something I love and I was excited to introduce them to the 70.3 distance. They both worked their butts off and I am so proud of both of them!
The Swim: 1.2 miles ~ 51:39
Now I can't speak for Joe, but I know he was super nervous and was nervous he might let down our team somehow. The relays went off in the last wave which was 8 am. He was worried about not making the 1:10 cut-off, but we kept telling him he had nothing to worry about and he didn't! 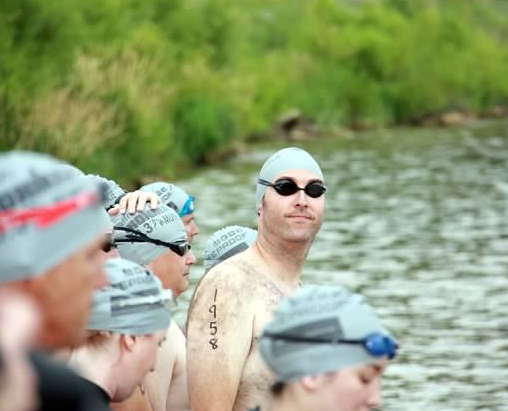 The water temp was right at 75 so it was wetsuit legal. I would say about 60% of the people still had them on. Joe opted not to wear one and I mean really you didn't need one, the water felt warm. After my sista and I watched him swim into the distance we walked up the bike relay pen. 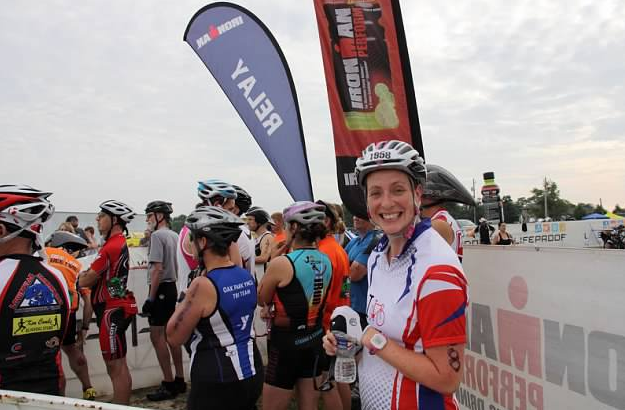 I wished Rachael good luck and positioned myself back by the swim exit. I saw Joe excited the swim at right about 51 minutes. I was so excited and happy for him!!! The swimmers had to run up a big hill with gravel (it was covered by carpets, but still). When I saw him I shouted out his time and a big smile came across his face. All the hard work paid off and he was running out of the swim exit to his love at his first 70.3 distance race! 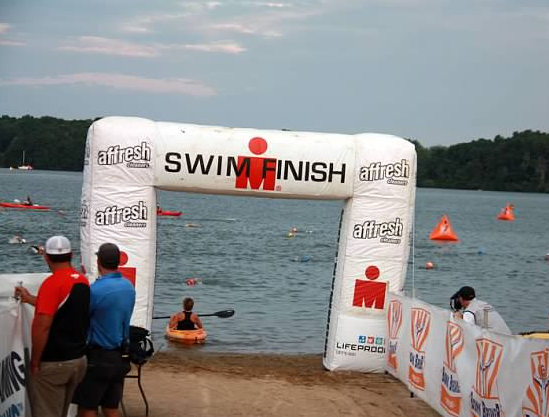 T1:
I ran as fast as I could from the swim exit up the relay pen. I shouted to my sista that he made it! She was so excited and jumping and clapping for him. 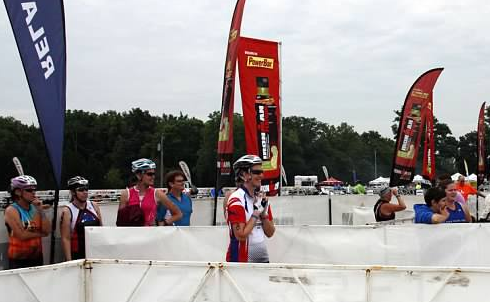 They gave each other high gives, exchanged the timing chip, and off my sister ran into T1.

She already had on her helmet and shoes so she only had to grab her bike.  As she went into T1, I sprinted over to the bike out area to get more pictures. No one ever told me being sherpa was so hard!
The Bike: 56 mile ~ 3:16:25
Once again I don't know exactly how Rachael felt throughout this ride, but I know she put in the work and was excited to get out there. She was a little worried about her back hurting her, but thanks to the good old tennis ball and an apple it felt ok on race day :) The course took you out a few miles, then it was a 2 loop out and back, then back a few miles to T2. It's a mostly flat course and luckily the winds weren't too bad. They got a few head winds heading out, but that's about it. 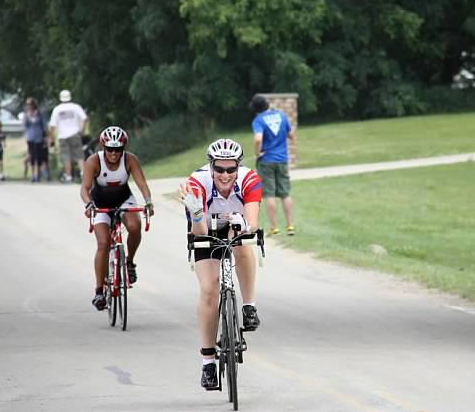 The bike went by fast for Rachael and she made one pit stop around mile 30 to refill her water bottles. I think she surprised herself how fast she was going and was worried I wouldn't be waiting in the pen for her yet. But I knew better and had headed over to the pen around 11:30 because hey it's race day and you never know what will happen!
T2
I had been waiting in the relay pen since around 11:30ish and it was hot as shit in there! I thought I might pass out (no breeze and right by the food grills). I myself don't know why I was so nervous for this run coming up. I don't know if it was the combination of waiting around all day and not knowing what to eat or if I was worried about Rachael coming back in off the bike. When I finally spotted her running her bike in from the across the way around 12:15ish I gasped and starting clapping! 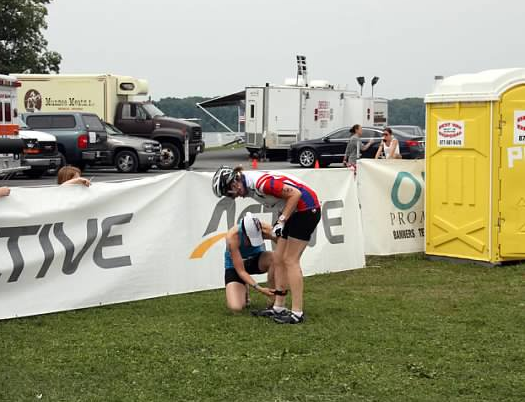 She kept telling me around a 3:30 bike split so I was shocked and excited to see her 15 minutes early! I had known at that point that the bike went well for her and I was so excited that both her and Joe had a great day. As she came running toward me I was allowed to leave the pen and take off the timing chip and off I went 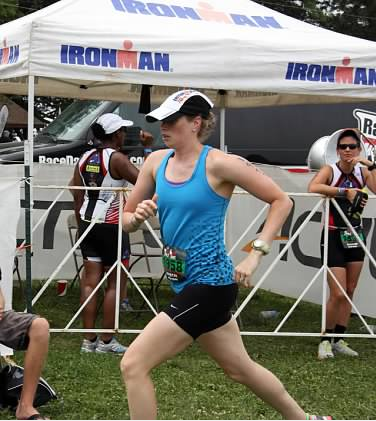 The run: 13.1 miles ~ 1:46:52
I was super happy to get the hell out of the waiting area and finally have my turn at sportz after doing so much waiting around. I went into this run with it being just a training run and wasn't expecting much out of myself. I must had been more excited to run than I thought though and took it out way to fast! My first 6.5 miles were a 7:47 pace. The next 6.5 miles would not hold the same. In the first 6 miles I had probably picked off about 5 or 6 relay runners. I was really happy about this. I also think this might the only time I am never passed in a 70.3 run and am flying past everyone else. I felt a little guilty. After the turn around I started feeling light headed and actually wanted to walk (wtf, I did not swim or bike). I kept at it though even though my pace slowed. At the beginning of the day I was jealous of everyone doing the full 70.3 but by this point I was glad I was only doing the run. At the end of the run I felt worst than I normally do after a full 70.3. Weird. The run it self had rolling hills and would have had no shade. But by the time I was out running the skys were overcast and the clouds looked like they were about to drop rain on us. A small amount of rain came around mile 10 but it was nothing heavy and stopped after 5 minutes. bummer. I was happy to be running down the finishers shut and had wished Joe and Rachael could have joined me since obviously I couldn't have crossed it without them! 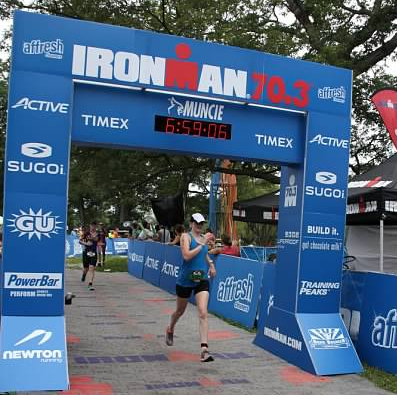 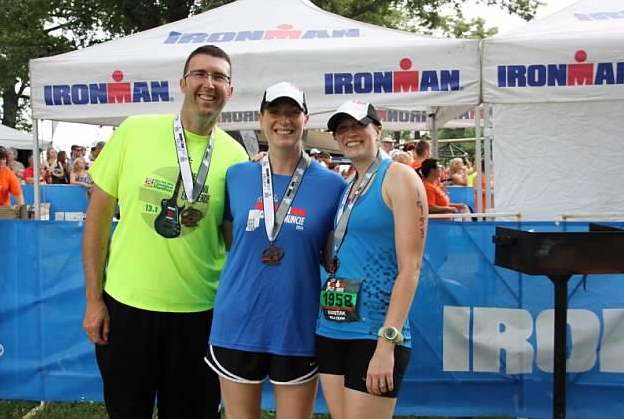